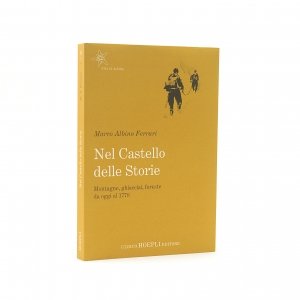 High above the valley, clinging to the rocks overlooking Sondrio, stands an ancient manor with walls an armslength thick. This is Castel Masegra, now the HQ of the Cast museum, the ‘Castle of Mountain Tales’. The itinerary through the rooms – curated by the author of this book – leads us to learn about and share an amazing, emblematic world by narrating the true stories of twelve different events. The protagonists are hikers and climbers whose adventures led them to new discoveries, each of which reveals the special climate that generated them, because people have observed mountains in different ways at different times, inventing and re-inventing them under the influence of history’s diverse cultural contexts.
Twelve chapters tell of so many human endeavours, going back in time to the wonder that started it all. Each chapter includes an introduction to the period involved and describes an endeavour that was important in the cultural context of the time: the leitmotif is the relationship between humans and nature throughout the history of mountaineering.
The book ends with a novel universal chronology of mountaineering, a valuable tool for consultation.

Marco Albino Ferrari, well-known in the cultural environment of mountaineering, is a writer, screenwriter and journalist. His works have been published by the major Italian publishers, and he has been awarded a number of literary prizes. Besides currently writing for the newspaper ‘La Stampa’, he is the curator of the Cast museum housed in Castello Masegra, Sondrio.

The book is both scientifically rigorous and an exciting read, reconstructing twelve feats in the mountains of the world, going back from our times to the 18th century. It is a series of stories that a romantic historian such as Giuseppe Mazzotti would have loved to have read. The idea for the book arose out of Castel Masegra, overlooking Sondrio and nowadays the seat of the Castle of Mountain Tales, where the author has curated an itinerary that takes the visitor into a dreamlike vision of the mountaineering world. The stories and their protagonists are described in these pages through culturally amazing and emblematic events that actually took place. The characters are hikers, climbers and explorers, as well as humble mountain folk, shepherds and poachers, and their stories confirm that mountaineering has a rightful place in our cultural history. At the end of the book is a novel tool for consultation: a universal chronology of mountaineering.