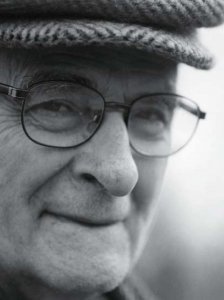 Montale wrote of his poetry: “poetry that takes stock and strongly influences, acting as a drug on readers’ judging intellect”.

Andrea Zanzotto was born at Pieve di Soligo (TV) on 10 October 1921. After his childhood and adolescence under the Fascist regime, to which his painter and decorator father was opposed right from the start, he joined the Veneto Resistance from late 1943 to 1945. He held occasional teaching posts during the war and in 1942 graduated in Literature from Padua University. He emigrated to Switzerland in 1946 and stayed there a year; when he returned to Italy he took up his teaching career and taught in several schools in Veneto.

These were the years when he produced his first collection of poetry Behind the Landscape, published by Mondadori in 1951 and for which he received the prestigious San Babila Literary Prize in the same year. This was also the period in which the poet suffered a psychological crisis that dogged him for many years.

In 1954, he was encouraged by Vittorio Sereni to publish Elegy and Other Verses. Although he was in touch with many intellectuals whom he met during his years at university, Andrea Zanzotto never moved to Padua, renouncing a university career, as he preferred life in the hills of Pieve di Soligo.  He wrote for important literary journals and continued his work as a poet: Mondadori published collections of his poetry in 1957 and 1962, and in 1968 a volume presented in Rome by Pier Paolo Pasolini and in Milan by Franco Fortini; collections were also published in 1973 and an anthology named Poems (1938-1972), edited by Stefano Agosti. In 1959 the poet married Marisa Michieli, whom he had met a few years earlier, and had two sons, Giovanni and Fabio.

In 1974 the magazine Studi novecenteschi dedicate a monographic issue to Zanzotto. The growing fame of his poetry and translations (Georges Bataille, Michel Leiris, Pierre Francastel and Honoré de Balzac) attracted the friendship of Italian poets and critics and put him in touch with international intellectuals (Ernst Bloch, Julien Green, Wolfgang Hildesheimer). In 1976 he published Filò, followed by Il galateo in Bosco (1978), Fosfeni (1983) and Idioma (1986): He also composed a musical adaptation of these collections, together with composer Mirco De Stefani (1994 to 1997).

In 1999 (first edition, second in 2003) Mondadori dedicated one of its Meridiani to Andrea Zanzotto’s opera omnia, with a preface by Stefano Agosti.

In 2003 composer Claudio Ambrosini wrote Trittico da concerto dai Filò di Zanzotto, for four female voices and pianoforte, which premiered at Venice University in the spring of 2004.  In 2007 Roman publisher Nottetempo came out with a long interview titled Never-ending rehab from a trauma whose nature is unknown.  In 2008, publisher Manni of Lecce re-issued Sull’altopiano – Racconti e prose (1942-1954) with some unpublished works from the poet’s youth.

He received many prizes, including Premio Viareggio (1979), Premio Feltrinelli dell’Accademia dei Lincei (1987) and in 1993 the City of Munster European Prize.  He received the equivalent of a knighthood from the Italian Republic (1996) and a gold medal for his meritorious contribution to culture and art (2001).

Andrea Zanzotto died on 18 Jaunary 2011, one week after his ninetieth birthday.

The Management Committee of the Giuseppe Mazzotti Literary Prize Association, in the centenary year of the birth of Giuseppe Mazzotti, acting on the unanimous consensus of the Prize Jury, assigns the Honoris Causa to ANDREA ZANZOTTO, with the following motivation:

“The many acknowledgements received and the constant appreciation of critics and readers have given Andrea Zanzotto’s poetry an eminent position in Italian literature. Our Association has found that this particular artistic quality has always been associated with great sensitivity towards the landscape, the environment and the natural and anthropic context in which we live.  These were the shared subjects and preoccupations that led to the poet’s friendship with Giuseppe and Nerina Mazzotti. From the first compositions in 1951, included in the collection ‘Behind the Landscape’, when modernity had not yet started to erode the territory, up to his most recent poetry and prose works, Andrea Zanzotto constantly addresses situations where our memories are stored, our relationships are encouraged and our existence comforted.  This sentiment became increasingly painful over the years, as transformations and destructions ravaged the environment and were experienced as personal wounds that offended him unbearably.  Andrea Zanzotto then began a constant, determined and strenuous battle to defend every threatened scrap of nature, hilly contour and panorama, certain that his choice could defend today’s men and women and those of the future.  It is this human testimony that our Association, which includes many contemporaries and fellow citizens of Andrea Zanzotto, intends to bring to the fore with the solemnity of this Honoris Causa, given the coherence and honesty of his literary production and presence in society. Touching thanks go to the Poet who has always used his words to denounce the risk of dehumanisation, while nurturing hope for awareness and responsibility.”