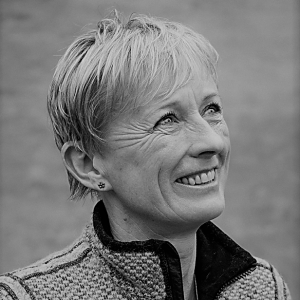 “I’m a climber, and a woman. I take that distinction with me as a flag to fly on the high peaks.”

Nives Meroi, born in 1961, was originally from Bergamo but has adopted Friuli as her home. She began climbing at 15 and at 17 had already started exploring her first routes. She met Romano Benet at 19 and from that moment he became her irreplaceable climbing partner, and later her partner for life.

During their career they have climbed some of the most difficult routes in the Alps, such as the first winter ascent of Pilastro Piussi on the north face of the Piccolo Mangart di Coritenza and that on the Cengia degli Dei, on Jof Fuart.

Over time their love of the mountains led them to explore far-away horizons, going where the air is rarified and, as Nives says “Every step is an effort of will”.

Their climbing is light and clean, without oxygen, Sherpas or pre-established camps. The Andes, Himalaya, Karakorum – successful adventures, such as the ascent in 2003 of three eight thousanders in just 20 days (Gasherbrum II, Gasherbrum I, Broad Peak), the second team in the world to pull off this enterprise, with Nives as the first woman ever. Or their ‘K in 2′, ascent and descent in five days, in complete solitude. And then Everest, the roof of the world, climbed without oxygen or Sherpas, followed by Lhotze, Kangchenjungab & up to the top of Makalu, on 12 May 2016.

Nives and Romano have now climbed the fourteen giants of the earth. On 11 May 2017 they touched the peak of Annapurna (8,091 metres). Meroi e Benet are therefore the first couple in the world to have climbed all the 14 eight thousanders, without oxygen or Sherpas, together: two solitudes united towards the peak.

Nives and Romano experience climbing as a lifestyle and for them will, passion and humbleness are the values that lead to success, whereas every defeat nurtures their need to start again. Because more than the result, Nives is interested in the experience, exploration of herself in different contexts: “The thrill of discovery – she recalls – is not a pleasure we have lost: just round the corner we B+see the other face of the mountain, the hidden one that’s forgotten”.

At the beginning of 2019 she published her book “Il volo del corvo timido” (Rizzoli Editore), in which she tells of the ascent of Annapurna, a challenging mountain that marked the conclusion of twenty years’ hard work for herself and Romano Benet.

MOTIVATION:
Formidable climber, introspective writer, a muse of the beauty she creates in her ascents and her thoughts. Her life proves that a star in her field can be conscious of her limits as she climbed 14 eight thousanders without forgoing kindness and affections.

A unique woman who was able to abandon her exploits to dedicate time to her husband in need, and to say, when they took up their activities again, “now three of us reach the top”, thinking of the anonymous bone marrow donor who was fundamental in saving the life of her husband Romano Benet.