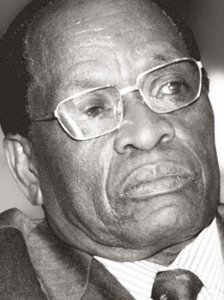 “When I retire I will be proud to have taken part in the activities of international scientific organisations, in spite of all the difficulties I faced.  Although I am materially poor, I consider myself a rich man intellectually because as a result of all my work I have become an authority on the environment and climate and on what society must do to ensure they continue to keep us alive”.

“Be more sober, be more sympathetic. Or at least try.  Mother Nature will be grateful”.

He returned to Kenya, married Alice Odingo, and began his career as full professor of Climatology at Nairobi University, becoming the doyen of African climatology studies.

His research into the African climate led Odingo and his assistants to denounce the serious consequences of foolish political decisions aimed at attracting the highest number of multinationals as possible by granting incentives to industries without considering the damage to the continent’s environment and climate.  His studies and appeals to safeguard the atmosphere and purity of the African climate soon aroused reactions and the displeasure of both local and foreign political forces, who saw Odingo as an obstacle to the undisturbed pursuance of their interests and economic enterprises.

The results of his research contributed to the declaration by the United Nations of ‘World Environment Day’ (1972); the setting up in Nairobi of the United Nations Environmental Program; and the World Meteorological Organization received a definite boost to extend its monitoring and studies into global warming and its consequences on our lives, agriculture and health.

The project for which Odingo became famous in the battle to safeguard the atmosphere was his research into drought on the African continent, particularly in the Sahel, now almost regular and no longer as beneficial as in the past.  The three volumes published at the end of the study, titled b Nature Pleads not Guiltyb  (1992) point out that b although Nature itself may be somewhat guilty of climate change, the greatest guilt lies with human activities that interfere with the laws of nature, causing many more, and much more frequent, environmental changes”. Since then, the issues linked to the environment, climate and consequences for life on earth, have gone global.

Due to his strong determination in defending the climate on the African continent, in 2002 Richard Samson Odingo was elected vice chair of the Intergovernmental Panel on Climate Change (IPCC), a United Nations scientific panel charged with analysing and studying climate change.

Our climatologist has made numerous other national and international contributions: National Climate Change Action Plan, co-chair of the Kenya Interministerial Committee; the International Commission for Sustainable Development; cooperation with the Battle North West Pacific Laboratories (Department of Energy, Washington DC and Washington Seattle, USA); on the Editorial Commission of the International Review of Climate Change Strategies and Management.

In December 2007, ex aequo with Al Gore, he received the Nobel Prize for the excellence of his scientific research and indefatigable work on climate change, particularly his research and suggestions on how to correct the polluting actions of African nations and other continents.

“For his contribution to understanding climate change and his appeal to the sense of urgency to cure the planet’s fever and begin the changes humanity and modern society are able to generate at critical times so as to start again with a green economy going towards sustainable development that’s healthy and durable, the Management Committee of the Premio Letterario Giuseppe Mazzotti Association confers its “Honoris Causa” on Richard Samson Odingo, who was up to 2008 Vice Chair of the IPCC, doyen of African climate scientists and professor at Nairobi University.  From the land that was the cradle of humanity, and the start of the long march of Homo sapiens sapiens, he studied the causes of drought in Africa, no longer as beneficial as in the past; he repeatedly launched his cry of alarm in defence of the environment in Kenya, the African continent and the planet, determined but never aggressive, with scientific proof and not demagogical, through dialogue without condemnation, with the force of his convictions but never blindly obstinate.”