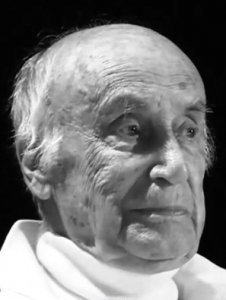 “Nowadays I climb mountains with my pen. No, I have never abandoned the mountains”

Spiro Dalla Porta Xydias was born at Lausanne in 1917, but moved in his childhood to Trieste, where he graduated in Political Sciences: he taught French in secondary school for a time, then went on to teach Theatre Culture at Trieste University and Pula University.

As a well-trained sportsman – Triveneto single and doubles tennis champion and prime league basketball player – it was almost natural for him to take up mountaineering. He was the last historic representative of the Bruti di Val Rosandra, where he started climbing at just under twenty in an attempt to flee the horrors of WW II and emulate the mythical figure of Emilio Comici, the Italian response to the important feats of German climbers in the age of ‘sixth grade’ (the highest grade of climbing difficulty deemed humanly possible).

Dalla Porta Xydias recalls most fondly his two historic climbing feats on the symbolic Campanile di Val Montanaia: in 1944, the first winter ascent of the sheer northern slopes of the Campanile, and in 1955, the east face, then unclimbed, which Comici had tried in vain to conquer. He made 107 first ascents and new routes and repeated many sixth grade classics. In 1956 he established the Mountain Rescue Station comprising Trieste, Udine, Pordenone and Maniago, which he ran for over ten years, earning two awards for the first helicopter rescue operation in Italy. Member of the Club Alpino Italiano Academy since 1958, he also ran the Hellenic National School of Mountaineering and the climbing school of the Bologna branch of the Italian Alpine Club (CAI). For him, reaching the summit has never been a mere technical or sporting gesture, rather a spiritual thing, the crystallisation of the search for elevation innate in humanity.

Together with his passion for mountaineering, Dalla Porta Xydias cultivated a life-long love of the theatre. He was one of the founders of Trieste’s Teatro Stabile, where for many years he directed activities for the Children’s Theatre and ran the Actors School. He directed important Italian actors in many plays and worked on 15 performances with the Fiume Italian Drama Group, the only Italian language theatre company outside of the Italian Republic. In 1975 he created the amateur theatre group ‘Teatro Incontro’.

He has published fifty books, 43 of which dedicated to the mountains and mountaineering, and been awarded several prizes, as well as a medal assigned to him by the House of Deputies.

He has worked with a number of newspapers and the most important Italian and foreign specialist journals. He is currently editorial director of the bimonthly magazine Alpinismo Triestino. For twenty years he was the national president of the Italian Mountain Writers Group (founded in 1929). He has also been a member of the CAI central committee, President of the XXX Ottobre Association, the Trieste branch of the CAI and the Eastern Group of the CAI Academy. In 2002 he was made an Honorary Member of the CAI, and in 2004 honorary citizen of Cimolais. Awarded the Order of the Thistle (Italian Mountaineering Club Award), he is an emeritus member of the Mountain Rescue Team. In 2006 he was presented with the fourteenth century city seal of Trieste.

Spiro Dalla Porta Xydias died on the brink of his hundredth year, on 18 January 2017.

Climber, Honorary member of the Italian Alpine Club and member of its Academy

Armando Aste was born at Isera (Trento) in 1926. He started climbing on the slopes of Monte Biaena at 22 years of age, after a day’s work at the Rovereto Tobacco Manufacturers. He adored rock climbing and was entirely self-taught: his first ascent in 1947 was the Via del Pilastro route of Mt. Baffelan, in the Vicenza Dolomites. He joined the Rovereto SAT in the 1940s and soon became one of the most important exponents of post-war European mountaineering and protagonist of the age of direct routes, solitary ascents (his great passion) and winter climbs. His innumerable ascents in the Dolomites represented the advent of modern climbing and thrust him into the legends and history of mountaineering. He was the first to open winter climbing on the Civetta and in the Dolomites with the first winter ascent of Via Carlesso – Sandri on Torre Trieste, achieved with Angelo Miorandi. He opened elegant, extremely difficult first routes, mainly free climbing, including the Via dell’Ideale on Marmolada d’Ombretta, with Franco Solina in 1964, “the greatest and most fantastic ascent on pure rock in the Alps”.

There are two salient moments in his long career: the Monza expedition to the Torres del Paine, in Patagonia, and the legendary first Italian ascent of the north face of the Eiger, achieved in August 1962 with Franco Solina, Romano Perego, Andrea Mellano, Gildo Airoldi and Pierlorenzo Acquistapace. Honorary member of the Italian Alpine Club and member of its Academy, of Giovane Montagna and of the Italian Mountain Writers Group, Aste has also been made Cavaliere e Ufficiale della Repubblica (equivalent to an English knighthood) and one of Italy’s Azzurri (Best Athletes).

A champion of ascetic alpinism, experienced as a step towards self improvement, this climber from Trento has always openly declared his strong Christian faith. He is famous for his repeated bivouacs during ascents, moments of communion with the mountain and extensions of the pleasure of the ascent. As well as physical prowess, tenacity and will, Aste has always distinguished himself for modesty, altruism and good will, values he applies with great humanity as part of his Christian convictions.

He has written a number of books about his life and mountaineering experiences; his latest is Pensieri di un alpinista.

“In the name of Bepi Mazzotti’s love for the mountains, the Prize named after him honours two giants of Italian mountaineering: Armando Aste, from Trento, born 1926, and 97 year old Spiro Dalla Porta Xydias, from Trieste. Two strong, distinct personalities that have in common a vision of climbing as spiritual advancement. Aste, who never forgot that above the mountains lies the sky, seen as heaven, the most important summit to reach. Dalla Porta Xydias, convinced that climbing provided the opportunity to rise above the miseries of daily life.

In this spirit they opened new routes and climbed Dolomite and Andes peaks keeping in their minds and souls the teachings of the great Emilio Comici. They are both profoundly convinced that mountaineering, before being a courageous sports achievement, is an art to be applied according to the rules, with a humble attitude towards Nature, showing the true mettle of one’s faith.

Both have written unforgettable works about the mountains. We honour their ideal of pure alpinism, nowadays often mortified by a degrading vision of the world, linked to competition rather than the beauty of the mountains and a love for them”.