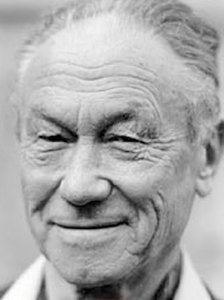 Born in Florence in 1912 to an Italian father and English mother, Fosco Maraini graduated in Natural Sciences in 1937, specialising in Anthropology; immediately after, he left for Tibet with the famous Orientalist Giuseppe Tucci, who he considered his mentor. In 1938 he was granted a scholarship to go to Japan as assistant professor at Hokkaido University (Sapporo).

Three years later, the tumult caused by the second World War prevented him from returning to Italy and he accepted a post as Italian reader at Kyoto University.  Because he refused to recognise the SalC2 Republic, from 1943 to 1945 he was incarcerated as an enemy by the Japanese authorities and confined to Tempaku concentration camp, together with his wife Topazia Alliata and his three daughters, Dacia, Yuki and Toni: he managed to return to Italy in 1946. Two years later he set off again for Tibet with Prof. Tucci. His encounter with Tibetan spirituality and traditions threw open the doors of Asia, the continent to which Fosco Maraini dedicated most of his life. Some years later he wrote about his experience in that classic of travel books ‘Secret Tibet’, presented in 1951, when occupation by Chinese troops was being completed.  The book, which was a best seller and translated into twelve languages, described a nation and a people frozen in a highly refined medieval civilisation, lacking the discoveries and instruments made available by science and technology, but which nonetheless lived a rich, satisfying life through its ancient religious, artistic, literary, theatrical and musical culture, until the upheaval caused by Chinese colonisation.

In 1953, Maraini returned to Japan, where he shot a series of important ethnographic documentaries, some of which have unfortunately been lost, and collected material to be used for the publication of three essential texts: Meeting Japan, 1956 (translated into five languages), L’isola delle Pescatrici, 1969 (translated into six languages) and the last one, Japan: Patterns of Continuity (1971), an illustrated monograph about Japan, reprinted countless times and translated into several languages. In recognition of his almost twenty years in the country, the Japanese government assigned its Star of the Order of the Rising Sun to Fosco Maraini and the Japan Foundation awarded him its prize for the diffusion of Japanese culture abroad.

In 1958 he took part, as a member of the Italian Alpine Club’s Academy (CAAI), in the Italian expedition to Gascherbrum IV (Karakorum), an extraordinary adventure he told in his book ‘G4, Karakorum’ (1960); the following year he directed another important expedition for the CAI, to the Saraghrar, Hindu-Kush, which he described in ‘Paropàmiso’.

In the following years Maraini divided his time between Japan, Italy and Asia.  He also lived many months at Jerusalem, where he wrote one of the most beautiful books ever on the city, ‘Jerusalem, Rock of Ages’, published by Harcourt Brace New York.

His experiences and studies are narrated in a host of internationally renowned books that consecrate an entire existence lived and observed through the curious, expert eyes of a photographer, ethnologist, poet, traveller and climber.

Almost forty years from the first publication, in 1998 he edited an updated edition of his best seller Secret Tibet, published by Corbaccio.  In this revised version, he included the images and text of the original, contextualised in the situation in our times, with all the historic, social and cultural implications.

In recent years, deeply struck by the Twin Towers carnage, he has been passionately studying the relationship between Islam and the West, re-considering his own encounter with the Muslim culture.

“Outstanding witness to our times, distinguished Orientalist, ethnologist and anthropologist, gifted explorer, climber, photographer, internationally renowned writer, and a fascinated traveller in the remotest corners of the Earth, an adventurous spirit with a strong passion for discovery and learning about far-away cultures, rich in spiritual value from which he cleverly drew deeply, translating wonderful evocations into splendid works, featuring fresh and effective prose that generates intense emotions.

To mention just two: ‘Secret Tibet’, (1951), a classic of travel literature, translated into twelve languages and reproposed this year by Corbaccio as an updated edition; and ‘Meeting with Japan’ (1956), another exemplary work that records the twenty years of his life spent in that country.”