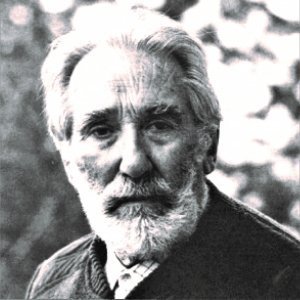 Mario Rigoni Stern was born at Asiago in 1921 to a family of ancient origins, well-known traders between the mountains and plain; his father was discharged from the infantry as a subaltern, and his mother was of Risorgimento education and spirit.

Although the economic crisis of the 1930s heavily affected the writer’s family, he managed to finish vocational school in 1936; two years later he decided to enlist as a volunteer and attended the Aosta Military School of Alpinism, where he achieved the qualification of ‘specialist in skiing and rock climbing’.

As a skier-messenger he took part in the Italo-French battle of the Alps and the Italo-Greek campaign in the Albanian mountains. In the winter of 1941-42 he became a skiing instructor for the Italian Expeditionary Corps in Russia, attached to the Monte Cervino ski battalion.  After returning briefly to Italy, he took part in the winter battles on the Don and later in the retreat of the Alpine Corps. When he returned to Italy in 1943, because he refused to join the Italian Social Republic he was captured by the Germans and deported, interned in different lagers until the end of the war.

At the end of 1945 he returned home on foot from Poland and found a job as a ‘category three temporary clerk’, paid by the day in the Land Registry.

In the post-war years Rigoni Stern started reading French and Russian literature, as well as the Italian poets ignored under the Fascist regime. In 1953, encouraged by Elio Vittorini, he submitted his first work The Sergeant in the Snow to Editore Einaudi, and achieved his first publishing contract.  The autobiographical novel that tells of the tragic retreat from Russia was immediately popular with both readers and critics, becoming one of the most famous novels of the post-war period.

From then on, many of his stories were published by several magazines: in 1962, Italo Calvino collected a number of these tales and promoted the first edition of Il bosco degli Urogalli. A year later Rigoni Stern began to contribute to the daily newspaper Il giorno and some weeklies.  Towards the end of the 1960s he worked with Ermanno Olmi on the screenplay for Olmi’s TV film broadcast in 1970, I recuperanti, dedicated to the experiences of the people on the Asiago Plateau immediately after WW II.

His war and life experiences and the history and nature of his native Altipiano di Asiago are the themes dealt with in Rigoni Stern’s entire works, masterpieces of Italian twentieth-century literature. Storia di Tönle (1978) is an account of the life of a mountain dweller when Veneto was annexed to Italy; Uomini, boschi e api (1980), a collection of stories and naturalistic impressions, the result of deep contemplation and thorough observation of the landscape; L’anno della vittoria (1985) and Amore di confine (1986) are stories and memories of a fast disappearing world; Arboreto selvatico (1991), his garden, where every tree has a story to tell; Il poeta segreto and Aspettando l’alba. 1995 is the year of publication of Le stagioni di Giacomo, a long story that describes rural life between war and peace, straddling the 1800s and 1900s; Sentieri sotto la neve (1998), Inverni lontani (1999), Tra due guerre e altre storie (2000) and L’ultima partita a carte, all published by Einaudi.

In 1999 he made a film-dialogue with actor Marco Paolini, directed by Carlo Mazzacurati, in which the writer talks about himself: the war, lagers and his difficult return home, but also his relationship with the mountains and nature.

He was awarded many prizes for his books, including the Feltrinelli Prize (1971) and the Chiara Prize for his career (2000).  In November 2007 he was made a member of the Académie Française.  Some of his books have been translated into the main languages and special editions have been published for compulsory reading in Italian State schools.  He was also honoured with several military decorations.

The Management Committee of the Premio Letterario “Giuseppe Mazzotti” Association, on the twentieth anniversary of the GAMBRINUS “GIUSEPPE MAZZOTTI” LITERARY PRIZE, and in the International Year of Mountains, voted unanimously to assign the HONORIS CAUSA to Mario Rigoni Stern, with the following motivation:

“One of the major contemporary Italian writers, Mario Rigoni Stern is a born story teller who has drawn inspiration from the humus of his native land to narrate the lives of the Altopiano people and their painful exile due to war and occupation, equating them with the animals and woods enclosed in the same horizon.

Speaking of his highly original writing, poet Andrea Zanzotto noted that it was characterised by “extremely open constitutional memorialism, truly unlimited and with wide horizons, just like the icy, snow covered Russian plain where there was lots of human warmth”.

From the sensational revelation of ‘The Sergeant in the Snow’, through the variegated range of his later publications, up to ‘L’ultima partita a carte’, Mario Rigoni Stern earned ever more appreciation from his readers and ever greater consideration from literary critics.

Whether he narrates the facts of war, or he contemplates his native land and mountains, his skill as an exceptional chronicler and exquisite story teller transpires.

Vigorous man of peace, all his works convey the message that b war is always a tragedy perpetrated to the damage of simple people and a culture that has always been overwhelmed by ‘history'”.

For all this, and for the model of coherence in his life and writings, the Management Committee confers on him this ‘Honoris Causa’.