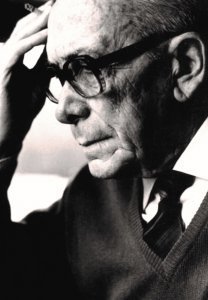 Nuto Revelli was born in 1919 at Cuneo. In 1942 he left for the Russian front as a volunteer, an officer of the Second Alpine Division ‘Tridentina’, to take part in the second defensive battle on the Don.  He experienced the tragedy of withdrawal, taking part in the battle of Nikolaevka. When he returned to Italy, in September 1943 he joint the Italian Resistance, initially with his own squad, and then with the Italian Liberation Band of the Cuneo Justice and Liberation groups.

At long intervals between them, he published six books with Einaudi, relating his difficult personal experiences, the result of forty years of determined research and documentation to lend a passionate voice to the Italy that didn’t count, the alienated, and the forgotten.  First of all, the veterans of all wars, then the farm labourers in the poorest countryside and last but not least the female figures of the “calabrotte” (hornets).

They are the voices of the ‘defeated’, a detailed fresco of a vanquished world, part of our society substantially in disarray, which he depicts with sensitivity, civil committment, love of the people and deep respect for the humble. The pages are impetuous tales of poverty, brutal fatigue and hunger, on the very edge of survival: The diary of an Alpine soldier in Russia (1946); The war of the poor (1962); The testimony of forty war veterans of Cuneo (1966); Letters from soldiers who died or went missing in WW II (1971); Testimony of farm life (1977). His last work The Strong Ring in the Chain. Women: stories of farm life (1985), which received the 1986 Grinzane Cavour Prize, told the stories narrated to him by 260 courageous women on the margins of society.

Revelli’s last three books published by Einaudi are inspired by the horrific experience of war and the fight for liberation, which after such a long time still pose questions and disturb consciences.  Decorated for Military Valour and his participation in the Resistance, on 29 October 1999 Turin University conferred on him a Laurea Honoris Causa in Education Sciences “for his activities as a narrator and essay writer, but above all for the pedagogical abilities he employed to disseminate the history of the war and post-war period in South Piedmont”.

“The Association’s Management Committee, acting on the unanimous decision of the Jury, has assigned the 1988 Honoris Causa to Nuto Revelli, honouring his strenuous moral and civil committment, which directed his gaze to the mountain areas and the ‘world of the defeated’.”