Architect and Founder of the Fondo per l’Ambiente Italiano, the Italian equivalent of the National Trust 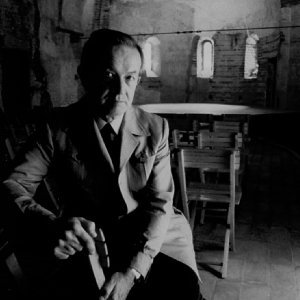 Born in Milan in 1922, Renato Bazzoni graduated in Architecture from the Milan Polytechnic and for twenty years served the same university as assistant professor of Architectural Composition.  Although during the boom years of the 50s he designed and built public and industrial buildings, hotels, houses and hospitals in Lombardy’s capital, he true passion was rural architecture “created by the people living in the countryside, mountains or on the coasts”, as he defined them.  This passion urged him to travel around Italy with his camera to document a fast disappearing rural world, farm fortresses, isolated churches and conic stone roof houses all over Italy, reporting the socio-economic changes taking place there.

In 1964 he became a member of Italia Nostra and served as president of the Milan section from 1973 to 1977.  Since 1981 he has been consultant to the national HQ.  In 1967 he used his photographs to create and curate an exhibition, Italia da salvare, the first important exhibition in Italy to report the disasters caused by environmental instability and the ruinous situation of the country’s artistic heritage. The exhibition was an international success – it toured Italy, Europe and the USA for five years – and shocked public opinion after the flooding of Florence and Venice in 1966.

In 1975 Bazzoni, Giulia Maria Crespi, Renato Predieri and Franco Russoli founded the Fondo Ambiente Italiano (FAI), a non-profit foundation whose aim was to enhance and protect Italy’s art and nature, following in the footsteps of the English National Trust.

The FAI became Bazzoni’s life and work, as a technical expert in heritage restoration and as an indefatigable promoter of the association’s growth, being responsible for a number of important restoration projects and organising conferences and trips, as well as editing the association’s newsletter.

He published numerous articles, monographs, books, lessons and research reports for the Ministry of Agriculture and Forests (“State of the Italian Coastline”, “Charter for the Mountains”, “Charter for Landscape Restrictions in Lombardy”).  He was awarded prestigious acknowledgements by the Milan provincial government, Italian government and the Fritz Schumacher Stiftung Foundation.

Renato Bazzoni died suddenly on 9 December 1996, still engaged in his many battles, leaving a moral testament that the FAI has adopted over the years since then.

Acting on the Jury’s unanimous indication, the Association’s Management Committee has assigned the 1990 “HONORIS CAUSA”; to Renato Bazzoni, an example of a life still actively committed to the defence and promotion of cultural and environmental values.