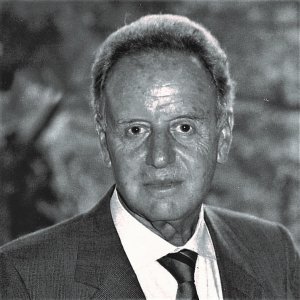 Sabatino Moscati was born into a Jewish family in Rome in 1922.  Attracted by the Orient, but unable to attend the state university due to race laws, he studied at the Pontifical Biblical Institute, where he graduated in 1945.

From the sixties Moscati directed his research on the Phoenician component of Mediterranean civilisation, extending to the Punic world and other aspects of the history and archeology of the ancient Mediterranean.  His essay ‘The Phoenician Question'(1963), in which he wrote of all aspects of the origins of Pheonician civilisation at the beginning of the Iron Age, contains the embryo of all the main themes of his later studies and teaching.

His writings on the Pheonician and Punic civilisation argue that the complexity of the Mediterranean world cannot be dismissed as a Greek and Roman bipolar vision, but must embrace the cultural components of the civilisations that more or less continuously revolved around the ancient Med. The Pheonician and Punic world is therefore linked to the formation of Italy’s history, in the same way as the Celts and other Italic populations: in such light, the ancient Mediterranean is no longer seen as an exclusively Greek-Roman cultural area, but as part of a wider horizon where East and West meet.

Moscati organised and directed important archeological missions: in Palestine, where he brought to light the citadel of the Kings of Judah at Ramat Rahel; in Sicily where the sacrificial stele of the sacred area of Motya re-emerged; Malta, where Juno’s temple and the Christian remains of St. Paul were uncovered; in Sardinia, where the Punic city of Mount Sirai was discovered; Tunisia, the site at Cape Bon of several fortresses from the Punic Age.

He published many studies, carefully written with the aim of disseminating and making scientific subjects accessible to the public at large.  With the same intention, he organised extremely popular archeological exhibitions at Palazzo Grassi, Venice, particularly those on the Pheonicians (1988, 750,000 visitors) and the Celts (1991), and a monthly magazine, Archeo, published by De Agostini from 1984 to 1997.

Besides his academic activities, Moscati held many positions of responsibility in scientific and cultural institutions and founded scientific publications, as well as editing many others.

Full member of the Pontificia Academy of Archeology, he was correspondent member and then national member in 1959 and 1968 respectively of the National Lincei Academy, of which he was vice chair from 1991 to 1994 and chair from 1994 to 1997.

The Promotion Committee and the Prize Jury has awarded him the 1986 Honoris Causa, for exceptional merits acquired during his studies and archeological research projects.