Although unusual, in 2004 the Association decided to assign its Honoris Causa for the XXII edition of the Gambrinus “Giuseppe Mazzotti” Literary Prize to a group formed into a committee and not to an individual, institution or authority. 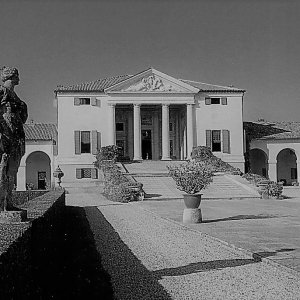 The entire community – two thousand souls – of Fanzolo, a hamlet under the municipality of Vedelago, agreed upon the need to monitor and do their best to stop certain commercial projects from compromising the historic beauty and functionality of Villa Emo, an outstanding artistic-environmental heritage (UNESCO World Heritage Site) and the surrounding territory distinguished by an agricultural landscape.

It all came about because of news that the Patriarchate of Venice, owner for some time of a considerable portion of the land in front of the Villa, was negotiating its sale; it seemed, however, that the purchasers intended to change its destination of use, transforming part of the land into quarries, as there was no special restriction from the environmental point of view.

Facing the danger of unacceptably compromising the beauty and functionality of the Villa Emo complex, and a threat to the environment in which many of the people of Fanzolo lived and had their roots, the citizens of Fanzolo united in a committee ‘Citizens of Fanzolo for Fanzolo’, supported by the mayor and parish priest.

The idea of the town community purchasing the land took a strong hold and led to an exchange of correspondence with the Venice Patriarchate to present a new solution.

Many times, during the twenty two editions of our Prize, the Association has honoured people or bodies particularly worthy in their fields with its ‘Honoris Causa’.

This year the choice is quite different from the usual practice.  Rather than an individual or a well-defined institution, our intention is to recognise the worth of an idea: a good idea, an example of aiming for a target in a highly civilised way in times when valuable natural or artistic goods are all too easily mismanaged.  Of course the honour goes from the idea to those who conceived and realised it.

“The ‘Honoris Causa’ is assigned this year to the committee ‘Citizens of Fanzolo for Fanzolo’, under the municipality of Vedelago (Treviso) who put themselves on the line to safeguard their ‘landscape’, consolidated over the centuries and uniting Villa Emo Capodilista, a work by renowned architect Andrea Palladio, with the surrounding land, used for agriculture since time immemorial.

In order to prevent a sudden sale from changing the destination of use of such a considerable part of the town’s land, the Citizens of Fanzolo for Fanzolo – two thousand souls – joined forces to promote an initiative that put the entire area under the protection of the Superintendency for Architectural and Landscape Heritage, as the community declared their willingness to make a purchase.”