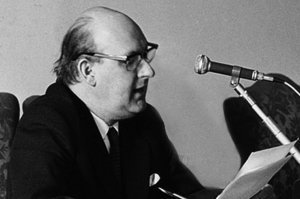 Giovan Battista Pellegrini was born at Cencenighe (Belluno) in 1921 and graduated in Italian Literature from Padua University in 1945, the following year specialising in Historial Linguistics.

From 1946 to 1963 he taught in the Universities of Pisa, Palermo and Trieste. In 1964 he returned to Padua University as full professor of historical linguistics, a position he held for many years, during which time he organised courses on the Comparative History of Classical Languages, Ladin Linguisitcs, Albanian Language and Literature.  He left teaching in November 1991.

He is a member of several Italian and foreign institutes and academies and has represented Italy at the International Onomastics Study Centre since 1960.  He became a correspondent member of the Florentine Accademia della Crusca in 1990.

Pellegrini has lectured and given talks in many conferences throughout Europe, in Italian universities and cultural centres and outside Europe at Beirut, Algeria, Tunisia and the US universities of Berkeley and Stanford.  He was Gastprofessor at Innsbruck for the 1978 summer term and Visiting Full-Professor at UCLA, Los Angeles, for the autumn quarter in 1979.  In his conferences, besides Italian he speaks French, German, English, Spanish, Serbo-Croat, Romanian, Hungarian and Albanian.

His vast scientific production includes approximately 700 publications, 25 of which almost entirely dedicated to historical-comparative linguistics, and some contributions to socio-linguistics and general phonetics.  His studies range from Italian dialects (particularly the Triveneto area), to Ladin and Friulano; from onomasiology to etymology; from Romansh linguistics – on which he has written three historical grammar books for ancient Spanish, Provencal and French – to studies on the hermeneutics of ancient Italian languages. He is a renowned specialist in Arab-Romansch linguistic relationships, Balkan and Danubian linguistics, toponomastics and anthroponymy.

The Friuli Historical-Linguistic-Ethnographical Atlas (ASLEF) was his idea and he directed and edited a large part of it.  He has also co-edited and edited other publications.

For the merits acquired in linguistic research he has received many acknowledgements and been awarded a number of prizes by institutions in his native territory.

The Committee and Jury of the Prize has assigned its Honoris Causa 1991 to Giovan Battista Pellegrini for his vast scientific production and his merits in linguistic studies and research.