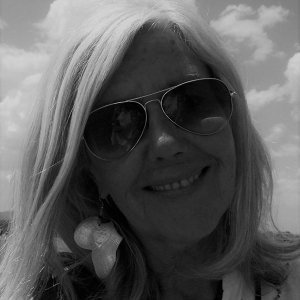 Kuki Gallmann was born at Treviso in 1943: she is the daughter of Cino Boccazzi, writer, doctor, explorer and archeologist from Treviso. After a short marriage in her youth, in 1970 she went to Kenya with her second husband, Paolo Gallmann, a Swiss agrarian with whom she shared a passion for Africa. Together they purchased a ranch at Ol Ari Nyiro, where they settled to live, in the county of Laikipia, a territory extending from Mount Kenya to the edge of the Rift Valley, for which Lord Delamere, an aristocratic English explorer in the early 1800s had a great love. Ol Ari Nyiro is a ranch covering 400 square kilometres, extending over hills, gorges and plains, famous for the many wild animals it is home to, and the variety of its landscapes, from savannah to woods, from forests to rocky mountains.

After the first years of life in Africa, happily discovering a new world, studying the animals and their habits and the indigenous people and their language, tragedy struck and she suffered greatly with the death of her husband in 1980, in a car accident on the Mombasa road, and then three years later of her son Emanuele, bitten by a puff adder. She found the courage to overcome her pain and decided to stay on in Africa, with her daughter Sveva, in the land to which her lost loved ones were so attached. She commemorated them by establishing the Gallmann Memorial Foundation to protect the natural environment and observe and preserve local traditions, seeking a balance with innovative methods. Ol Ari Nyiro is now an uncontaminated green belt in an increasingly concrete-encroached Africa, an oasis of vegetal and animal biodiversity (over 470 bird species and many other animals, some threatened by extinction, such as the black rhinoceros and the elephant); it is a place where botanists, ethnologists and zoologists, veterinary surgeons and herbalists can meet; it is a territory that preserves and promotes the cultural heritage and identity of the indigenous peoples through an art and crafts centre (where the traditional methods of processing hides, cotton, wool, coloured seeds, gourds, wood, tree bark and roots are handed down) and a small school to pass on knowledge of the traditional use of seeds, pods, tree bark and plants as herbal medicines.

For many years Kuki Gallmann has been bravely fighting illegal hunting and poaching, which in a situation of famine and poverty remains one of the easiest and most lucrative sources of income, despite laws and prohibitions. Hers is a battle for the conservation of the environment, the protection of wild animals, particularly elephants, and a sustainable system to hand down to future generations. She tells of her love for this land and her battles in her books ‘African Nights’, ‘The Colour of the Wind’, ‘Elephants in the Garden’ and ‘Night of the Lions’, and a book dedicated entirely to Kenya, ‘I Dreamed of Africa’, which in 1998 was made into a film of the same name, directed by Hugh Hudson and starring Kim Basinger and Vincent Perez.

In April 2017 she was seriously wounded in an ambush on her estate, which had become the epicentre of violent conflict between private land owners and the semi-nomad cattlemen who invade properties, destroying the environment to take possession of natural resources.

“The city of Treviso, Veneto, and Italy are proud to be the birthplace of Kuki Gallmann, whose origins gave her the essence of the spirit of love, intelligence and curiosity to open up to the world, with its natural wonders and culture. She has been put to the test by suffering and confrontations with local tribes, and has applied her tenacious will to respecting the Creation, putting down roots in Africa and showing an extraordinary ability to persist, with a generous spirit of adaptation to the advantage of the local and universal community.”

Brilliant writer, excellent naturalist, and courageous innovator, she has successfully united observance of traditions with the need to implement practical initiatives for education, creative crafts, traditional medicines, knowledge of and support for the environment. She was also inspired by the memory of her father Cino Boccazzi, who participated in all these experiences and shared Bepi Mazzotti’s friendship, company, daring, love of beauty and fascination with research.

On the occasion of the XXXV edition of the GAMBRINUS GIUSEPPE MAZZOTTI PRIZE, the Management Committee of the Giuseppe Mazzotti Literary Prize Association, with the unanimous approval of the Jury of the GAMBRINUS GIUSEPPE MAZZOTTI PRIZE, conferred on Kuki Gallmann its 2017 Honoris Causa for her tenacious, untiring and corageous committment and the many initiatives and activites of the Gallmann Memorial Foundation she established to protect the natural environment on her vast Ol Ari Nyiro ranch in the county of Laikipia, and the local communities.”