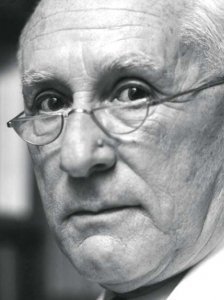 «Respect for Natura stems from knowledge and love.  My ‘scale’ of values regarding animals and Nature is this: knowledge, love and respect.  I am, if you will grant me the expression, ‘a religious naturalist’»

Sandro Ruffo was born at Soave (Verona) in 1915.  Since his childhood he was fascinated by the study of animals, particularly insects, and in 1938 he graduated in Agricultural Sciences from Bologna University with a dissertation on the biology of Coleoptera Chrysomelidae.

Called up in 1939, he was kept on at the beginning of the war and became an artillery officer.  The 1943 armistice found him in the south of France, where he was taken prisoner by the Germans and interned in lagers in Poland and Germany. He returned home in August 1945 and that same year was assigned the post of zoologist conservator of the Verona Civil Natural History Museum, of which he was appointed director in 1964. His task to rebuild the museum from the ruins of war was completed in 1965, when the public exhibition area was opened, completely renovated to modern naturalist museology criteria.

Starting in 1950 in Apulia and the Tremiti Isles, his research continued for over twenty years in the main mountain ranges of the Appenines, Monti Sibillini and the Madonie in Sicily.  Information about fauna in the Appenines was still scarce and his work drew the attention of Italian and foreign zoologists.

Ruffo was particularly interested in studying animals living in caves (troglofauna), an environment that hosts a number of endemic species especially significant for interpreting the evolution and history of fauna. Studies of subterranean fauna were extended to include fauna living in the River Adige pore water, i.e. a group of minuscule animals that live in the interstices of river sediment.  During his investigations he discovered two orders of crustaceans previously unknown in Italy and in the second case in Europe.

His interest in Italian fauna encouraged him to revive the collection “Fauna d’Italia”, published by Calderini, whose Scientific Committee he chaired until 1991.

Ruffo dedicated over 120 papers to the Amphipoda, regarding different regions and environments: the Mediterranean, the Red Sea, Madagascar, the African Atlantic Coasts, north and central African internal waters, and the Antarctic Ocean.  During these studies he identified 24 new generi and 130 new species. In the Mediterranean he coordinated the activities of ten Italian and foreign zoologists, with whom he produced four volumes under the title B+The Amphipoda of the MediterraneanB;.

From the 1970s he began to take into consideration the problems arising from deteroriation of the environment: he took part in the C.N.R. project “Promotion of the Quality of the Environment”, editing the publication of 29 manuals in a series of his own creation “Guides for Recognising Animal Species in Italian Internal Waters”. Together with Campaioli, Ghetti and Minelli, he produced a practical manual for recognising macroinvertebrates in Italian fresh waters, which facilitated the use of these animals in drawing up Biotic Indices for water quality.

Because he strongly believed in the importance of scientific museums, Ruffo was one of the founding members and the first chairman of the National Association of Scientific Museums.  He always associated research activities with teaching, witness his renovation of the Verona Museum from a nineteenth century structure to a modern exhibition venue, and his many publications.

He has held numerous academic positions, was a committee member of the Italian Entomological Society and the Italian Zoological Union.  A member of the Lincei Academy, he also received several acknowledgements from national institutions, and was awarded a Laurea ad Honorem in Knowledge and Management of the Natural Heritage by Bologna University.

“The Association’s Management Committee, with the unanimous approval of the Jury, assigned its HONORIS CAUSA 1992 to Sandro Ruffo, former Director of the Verona Museum of Natural History, scholar, naturalist and museologist of international renown.”